SNES DS is a SNES emulator for DS, coded by Loopy, using the same graphics engine as SNES Advance but with sound support and higher compatibility. Aside from the addition of DLDI support, this emulator was last updated in December 2005, and as such, some of the newer emulators such as SnezziDS and SNEmulDS might be a better option.

In order to run SNES DS on real hardware, the requirements are as follow: Nintendo DS, GBA Flash Card that works with DS, snesDS emulator and atleast one compatible SNES rom.

This is for usage on most self contained slot-2 GBA Flash Cards.

Note that this only applies to slot-2 Supercards that have GBA compatibility.

Note that this method seems to only work with the older versions of SNES DS. The 11-27-2005 version is recommended for its SuperDAT support. To save use QPC Saving.

It is also possible to create an empty file as is described in the next section, but it is not recommended due to its low compatibility. Packaging the games into the .ds.gba or .nds file is recommended.

The guide presented here will allow you to run .smc files straight off your card, but as the SuperDAT patches are not applied, compatibility will be low and graphical layers will remain incorrect.

It might also work to build a snesDS.ds.gba menu rom as described in General Usage above.

For getting the games as playable as possible on a slot-1 device (and any other device without GBA compatibility). See the video tutorials in the Links section. Loopy removed the necessary tools from his site, hence the mirror download.

For now the compatibility remains low, so if you're testing SNES DS to see if it works on your setup, make sure to use a rom that is confirmed to be working, like Super Mario World (U). See the compatibility list for more info.

If only one ROM in the pack does not work, it seems to prevent SnesDS from starting at all. Try with one ROM at a time to see if it works, Super Mario World (U) [!].smc works. You could also generate a snesDS.nds for each ROM, calling them snesDS-Contra3.nds etc.

With the 11/27/2005 version of SNES DS, the latest SuperDAT from SNES Advance, and uCON64 (to remove the copy protection), Super Metroid [JU] [!].smc works in SNES DS at full speed, with sound, and with few major glitches (the game is very beatable). Saving also works in the same way that a GBA game would work on your flash card. 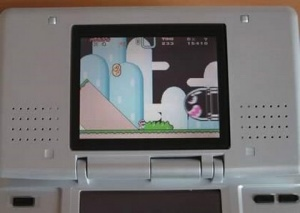