This is a port of the remake of Maze of Galious to the 3DS.

The CIA file is to be installed with FBI

The game creates a MoG subfolder inside the 3ds folder if doesn't exist. Here will be stored the gamesave.

MoG is an addictive game where you have to kill thousands of enemies, collect items in order to obtain new powers and defeat some great demons at the end of each level.

In MoG you are free to go everywhere you want from the beginning of the game. You have to be very careful of the order in which you visit all the rooms in the huge map if you want to keep your character alive.

The map is structured in a main map (called the castle) and 10 submaps (called the worlds). Initially you are in the castle and you have to find the keys that open the doors to go to each of the worlds.

To complete the game you have to defeat the boss at the end of each one of the 10 worlds. You are free to revisit each world as often as you want in order to see if you have missed something.

To defeat all 10 demons you control two characters: Popolon and Aphrodite. Each one has special abilities, i.e. Popolon has a greater ability to jump and Aphrodite is able to dive. 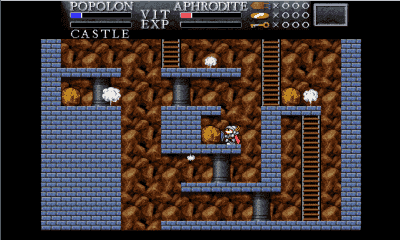 Some sound sets contain ogg files that are too resource consuming to make the game playable on o3ds. With some other music sets the game works fine (like the default Jorito set, the original set or the alternate set).

Changing the sound set or exiting the game sometimes crashes the system.