Jpcsp is a PlayStation Portable emulator allowing you to play PSP games and run homebrew applications on a PC. Jpcsp has been started in July 2008 and is developed by a small but active team using Java.

This emulator is an open source project. The project is still a beta release, and according to the offical webpage there are more than 600 games that are able to run using jpcsp.

Note: It is strongly advised that even on a 64-bit OS, you should install the 32-bit JRE release and use JPCSP's 32-bit version, for compatiblity reasons.

Be sure to have JRE 8 (Java Runtime Environment) installed in your computer before attempting to run JPCSP.

For Windows version, use the batch (.bat) files located inside JPCSP's main folder (start-windows-x86.bat or start-windows-amd64.bat).

To load an ISO/CSO image, you need to place it under the umdimages folder (this folder can be changed under Options > Configuration > General).

For homebrew, place the application's main folder (which should contain the Eboot file) under ms0 > PSP > GAME.

Allows you to load UMD images (Load UMD), homebrew applications (Load MemStick), and any other file such as demos (Load File).

It also allows to capture and load the current RAM memory and GPR registers' state to a file, so it can be used as an additional save option (Save/Load Snapshot).

Contains dedicated settings for Video (Rotate and Screenshot), Audio (Mute) and Controls features, as well as the Configuration menu.

Allows you to apply cheats to the current application.

Allows you to change the language of the emulator.

Contains the About window. 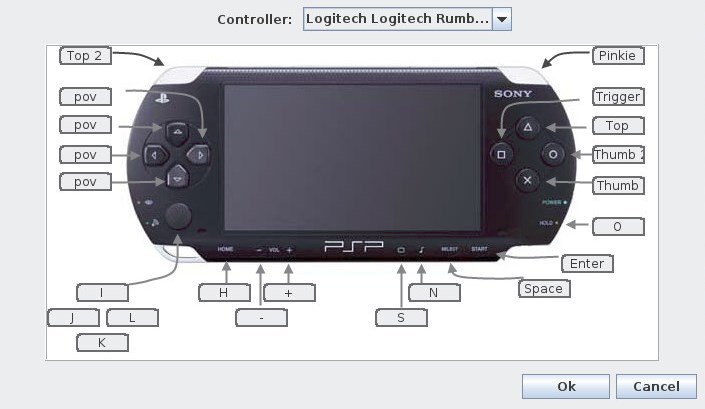 Problems have been reported with ATI/AMD graphic cards: keep you Catalyst driver up-to-date as new releases might fix issues.