Geo Wars is a DS homebrew space shoot'em up game. You must battle through waves of enemies to save Trinity and all of humanity.

This game won the dev-fr.org compo 2007 sponsered by DS-X (ranked 1st in Game section). It was entered into the 2009 best DS homebrew contest.

DLDI patch .nds file if needed (if your card does not have auto-patching) and copy it to the root directory of the card.

In Geo War, there are full of ships as this consists of 10 official missions and 2 training missions, each mission will take place in an area and make your ship evolves as you complete missions. The game is to fight with your ship against anyone who stands in your way so he can save humanity.

At the beginning of the mission take a single ship loaded with weapons base, but over the course of the different areas you can get power ups to improve your fire and bombs.

It contains two different characters, each with its own characteristics of attack (Progress for each character is stored seperately).

There are multiple levels of evolution in this game. You will see it in the story and through some funny naming references, but also throughout the missions you will see you ship & capabilities evolve.

In intense battles you will see the explosions evolve into massive blasts. Once you have upgraded your ship by playing through the missions, the upgrades persist with you - so you can go back and play Mission one with all the new capabilities. So in this way, the game really evolves to allow you to max out scores.

Be sure to enjoy the stereo sfx with headphones. Audio options are in the pause menu during gameplay.

There are two playable characters and you must progress through the game as both characters.

There are 10 missions, 10 Zones and 2 training missions to play.

D-Pad - Control direction of the ship 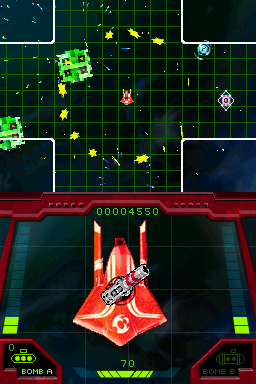 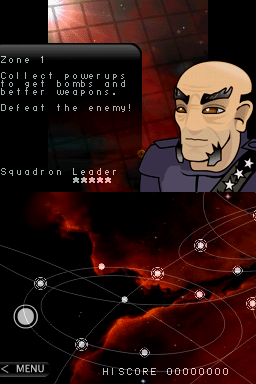