Chess Clock aka Game Clock PSP is an Analogue Chess/Game Clock Simulation for the Playstation Portable.

It is developed in C++, using Phoenix Game Engine (PGE) by InsertWittyName and MK2k.

The star-shaped wheel indicates the following:

Use the app for Chess

Playing chess with a game clock has been established since 1861 where sand clocks were used back then. In 1866 a match was played where the referee used stop watches. In 1883 a mechanical game clock was introduced which contained two separated clocks, each being activated/deactivated by a movable bar.

In 1899 H. D. B. Mejer proposed the use of a small flag which falls when the player's time runs out. So this app here uses the ideas of chess enthusiasts more than 100 years ago.

You can play different variants on chess with a game clock. The default setting is:

The standard use is:

Chess Clock PSP can be used to play Sudden Death, a varient of Chess where each player gets a fixed amount of time for the whole match (usual amounts are 45 or 30 minutes for a standard match can play a Blitz Chess/Speed Chess is usually played with 5 minutes for each player).

Other variants are better implemented on a Digital Clock simulation.

Use the app for Poker Tournaments

In Poker Tournaments the Blinds are raised after a certain amount of time. No problem for the Game Clock simulation.

Rewind one of the clocks or even both to the time setting of your likes and let it go until the flag falls, then the Blinds will be raised, the clock gets rewound and so on.

Use the app as a Stop Watch

The clock pointers of the simulation aren't exactly accurate, so you should not measure events where seconds count. But you can use the app for cooking an egg without being worried.

D-Pad Down - Stop both clocks

D-Pad Left - Rewind the currently active clock, if no clock is active both clocks get rewound at the same time (keep D-Pad Left pressed for increased speed)

D-Pad Right - Fast-Forward the currently active clock, if no clock is active both clocks get fast-forwarded at the same time (keep D-Pad Right pressed for increased speed) 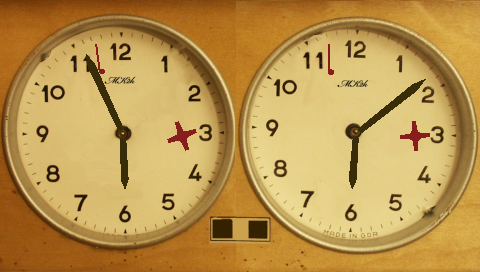 How to Use Classic Analog Chess Clock (Chess House)

This software comes as Release for 3.xx Custom Firmwares.

Big Thanks go to: