You Have To Burn The Rope DS

You Have To Burn The Rope DS (Abbreviation: YHTBTRDS) is ​a remake of Flash game on PC, You Have To Burn The Rope, originally made by the Swedish student Kian Bashiri (Mazapán). The game was created as a satire which take no time to finish it, this DS port is aimed to recreate the game with additional functions and to add replayability.

This homebrew was participated in the NEO Summer Coding Compo 2009, ranked 4th under Game section.

At the end of the level, you go up against a boss in a fight, otherwise known as the Grinning Colossus.

For you to escape unscathed, you must jump to one of the torches on the wall and use it to burn the rope that hangs the chandelier from the ceiling. And just like in any slapstick comedy sequences, the chandelier will then drop on the boss, which will then significantly weaken him. Then you can go ahead throw your axes at him for good measure.

Down - Throw an axe (with cheat activated)

Select - View map on the top screen (as long as No-Map cheat is not activated), Back to the menu (during pause) 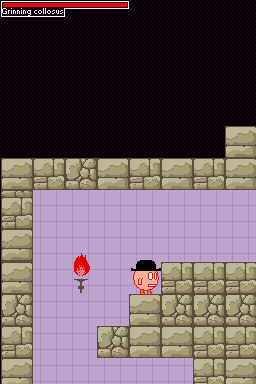 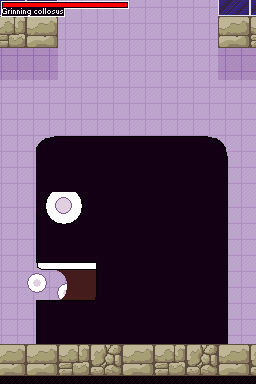