Pogoshell is a replacement for the menu-program you get when you put several roms on your flash cart. But it's more than that since it actually uses a filesystem with directories so you can put roms along with other files just like you would on your computer. Pogoshell can be extended to handle different file types (like playing music, running nes and spectrum games, viewing pictures etc), almost like on a real OS.

It also has an SRAM filesystem that lets you have much more than 4 saves at a time on your flashcart.

Copy some games/roms/texts to the root folder.

Run BUILD.BAT to build a rom from your root directory Now you can either:

You don't have to bother with users if you don't want to, but L+SELECT lets you choose between the users that are defined in .shell/users.

Different users will not see each others sram-saves, but you can use Copy/Paste to copy a file from one user to another.

User 100 is the textreader and all generated indexes are saved as that user.

Right now, ".shell/default.theme" is loaded - rename one of the others to use that. The themes basically define the GUI components - feel free to experiment.

The tool bmp2bm is used to create icons and backround bitmaps.

Also note that the theme-file actually defines the whole GUI so you can't change it any way you want - the basic components must be there. 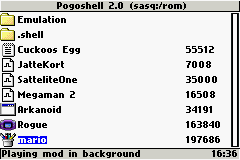 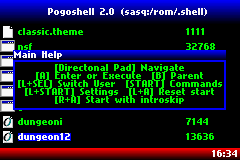 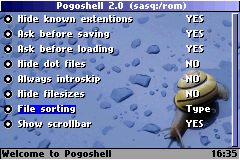 Note that PogoShell can be used with any flaschart, but only supported carts can start roms and use SRAM.