Wardive is an adaptive music homebew game with locative levels for the NDS. It converts wlan-waves into game objects. The wlan conversion uses a streamsearch algorithm which was also used in streamfishing and searchsongs.

Cope the whole content to the root directory of the card.

Wardive captures the wlans in the immediate area like a wardrive-tool and creates a game.

It reads the names of the hotspots in your immediate area and turns them into enemies which try to take over your wardive-cristal. Try to fend them off with your touch pen, put your shields up. And don't just stay in one spot. Take metro-wardive for a walk or on a ride through town. Find out how may enemies hide in the area you are in or pass through.

Each time you play, metro wardive captures different data and creates a new level for you. It changes according to its real life location as much as to its virtual data world. 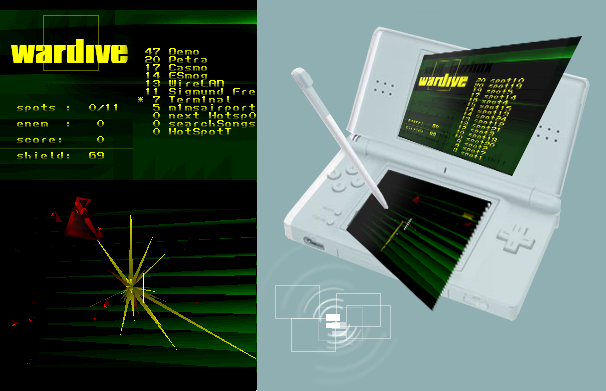