Lode Runner Return is a DS homebrew game based on the old school platform game, Lode Runner. The original Lode Runner was a 1983 platform game, first published by Brøderbund. There are 150 levels in the game which progressively challenge players' problem-solving abilities or reaction times.

Lode Runner Return is an entry for the NEO Coding Compo 2010.

The Bungeling Empire has confiscated gold chests. It's up to you to rescue them.

In this game, you control a stick figure and must collect all the gold in a level while avoiding guards who try to catch you.

After collecting all the gold, you need to escape by reaching the top of the highest ladder.

You have the ability to dig the bricks located on the ground around them, this is sometimes required to collect the gold.

Finally, if you find yourself in a situation where you can no longer move, you lose (for example, if your character is surrounded by two walls preventing you from digging or moving, while there is no ladder), however your character will not suffer damages from falls. 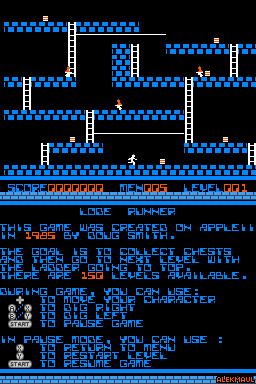 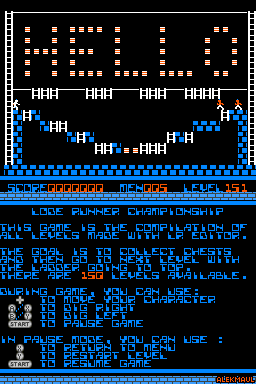 It does not work with emulator, use the LRReturn_foremu.nds version.

Fabien GIGANTE for level ripping (levels are taken from his Java version).

Douglas E. Smith and Broderbund for the AppleII version.