International Karate is a DS homebrew fighting game. This is a clone of the classic action game on the System 3 Commodore 64, which also made appearances on the ZX Spectrum, Amstrad CPC, and Atari ST.

This homebrew was participated in the 2009 best DS homebrew contest.

The objective is to defeat opponents and rank up while achieving the highest score depends on how you take the blow, the judge will decide if you get half or a full point.

If you can get hold of the opponent and not give truce, you will be awarded with bonus points. It also contains extra stage where you can attempt to break as many bricks as possible within the time limit.

To start the battle, press Start. If you don't press Start, the game will show you a demo battle just like an arcade game.

When A/B is pressed:

Down - Low punch in the opposite direction 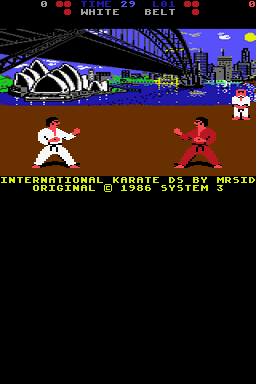 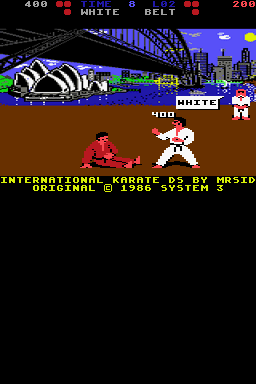