µLibrary is a new library for Nintendo DS. Basically, it is meant to use the 3D GPU to create nice 2D games very easily, using a different approach than existing libraries (similar to OSLib). A few examples are supplied, as well as a Doxygen documentation and a small .chm documentation with a FAQ. There are also 2 templates for VHAM, Programmers Notepad or just make, one with PALib and one without it.

The 3D GPU provides additional effects over the 2D GPU, like full transparency with alpha channel (objects can blend amongst them), a larger number of sprites (up to 1536 instead of 128), no zoom or rotation limit (2x with the 2D GPU), a larger limit for the sprite size (2048x2048 instead of 64x64). It is also possible to draw primitives like lines, rectangles, etc. allowing nice effects like in Yoshi's island for example.

µLibrary also provides a low level layer and is open to the hardware. You can also mix 2D and 3D in a single project.

It was participated in the NEO Spring Compo 2007 (winner).

Enter into the Install folder of your distribution.

There is a batch file, named Install.bat, that will copy files. First edit it and verify that the paths are corrects (ROOTPATH=C:\devkitpro\libnds by default, change it to the path where libnds is located).

Once finished, execute it. After a confirmation, it will copy all files to their respective locations so that you can use it.

Library comes with two templates, located in the Templates folder of its install:

The render method is similar to a sheet of paper. You first draw a background, then put some mountains, then some trees, some characters and so on: you draw your objects in the order they should appear on the screen (the first is behind, the last one is over the others).

Some examples are provided by the developer:

The doxygen documentation is available here. 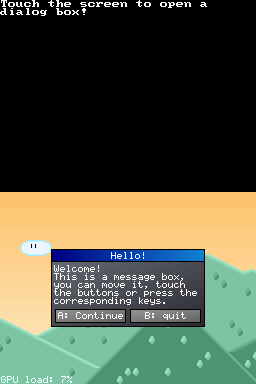