NitroGrafx V0.6 is a PC-Engine/TurboGrafx-16 emulator for the NDS written by FluBBa, it can also emulate some of the (Super) CD-ROM^2 & Arcade Card.

Note: You will need to prepare the compatible BIOS images in order to use this emulator.

Download and extract file. Depending on your flashcart you might have to DLDI patch the emulator file.

You should also create a NitroGrafx directory either in the root of your card or in the data directory (eg h:\NitroGrafx or h:\data\NitroGrafx).

Put your games on your flash card, max 512 games per folder. Filenames must not be longer than 62 charsacters. You can use .iso files or .bin/.cue files.

Select a .iso file or a .cue file from a bin/cue combo.

Press the Start button when the CD-ROM System screen shows up.

Right now NitroGrafx supports loose .iso files for games that only has 1 data track (or 2 where the last one is a backup), or bin/cue files for complete cd rips.

You can rip your own CDs with program such as Cdrwin. If you already have your games make sure to check the rip with TocFixer, and test them on audio player (.wav) and virtual CD device (.cue)/ mount it in a virtual CD device and run in an emulator like Ootake (.bin/.cue).

Also note that all games are not perfect (a lot of US games doesn't work because they are encrypted, use PCEToy or the emulator Ootake to decrypt these before you use them). And don't use overdumps as these are evil on PC Engine. 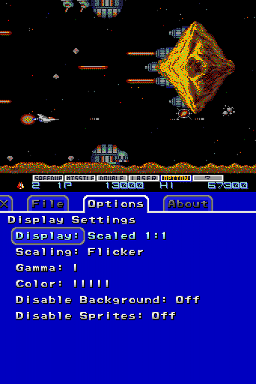 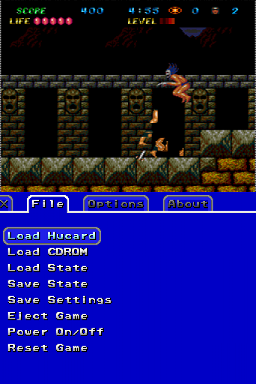 The games that have severely lagging cutscenes tend to be the ones with major graphical errors, such as Emerald Dragon. One of the times I tested Mystic Formula tonight, the first in game cinema went at a perfect 60 FPS, but upon a fresh boot, went at the usual 55-58.

If you restart your DS, loading the savestate does not work. Savestate is only for the data, not CD audio position, but that's OK. Just don't do a savestate during a cutscene.

This emulator has come a long way in such a surprisingly short time! A large number of CD games are thoroughly playable, with only minor glitches in cinemas, and little to no slowdown.

Zeograd for a lot of help with the debugging. Charles MacDonald and David Shadoff for a lot of the info on the PC-Engine.