An open-source Nintendo Entertainment System/NES emulator for the Nintendo DS. It can be compiled with GCC (devkitPRO/devkitARM, the version supported) or ADS (the original version, no update).

Patch nesDS.nds with DLDI if your card needs it.

Copy nesDS.nds to the apps folder of your card.

Create a folder called nes in the root of your card.

Put your legally held .NES files in that folder.

Run nesDS from the Apps menu of your card, then select which nes rom you would like to run.

Q. What can I do if some pics had been crashed?

You can try the sprite per-line type under the Display menu bar. 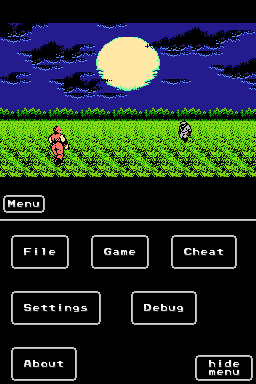 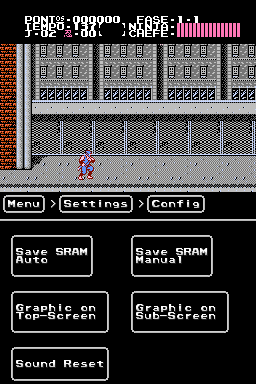 Run the nesDS EX Edition on iDeaS may cause a crush, because iDeaS does not support swi.

Notes: All other functionality should be identical to the original. nesDS inputs now work properly on emulators. You can run the nesDS on ideas by DLDI patching it with the R4 dldi patch usingdlditool. You must then enable DLDI support for R4 under File->Properties. You can also run nesDS on desmume but you will need to create a filesystem image from some files and embed the files to the emulator (you need to use fcsr for this).

Ported to gcc by minitroopa.

EX Edition made by huiminghao.

0.4x Edition made by huiminghao.