Themely is a theme manager for the 3DS, similar to Anemone3DS and CHMM2, which allows you to apply custom themes to your Nintendo 3DS system.

This is an open source fork of Themely originally made by Erman (aka erman1337), and is based off v1.3.1 before the project become closed source.

Run make to build the 3DSX, CIA, and ZIP files, make run to build & run on Citra. A debug build with debugging symbols will be built by default, append DEBUG=0 to the make command to build a production build.

Start Themely (it may black screen the first time you start it. If it does, force the 3DS/2DS to shut down by holding the Power Button and try again).

Find the theme you downloaded in the list. If there is only one theme in your Themes folder, there will not be a list.

Choose the theme you want to install.

Once completed you should see the the Custom Theme you on your Home Menu.

A theme is composed by several files: 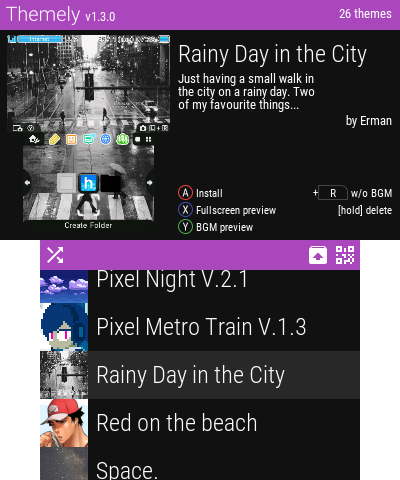 How to Install Custom Themes on 3DS with Themely (T3CHNOLOG1C)