The Detective Game is a remake of the 1986 C64 game by Sam Monthorpe for the Nintendo DS. Characters were created by Paul Jay and the plot was cunningly devised by the Magnificent Seven.

EFS version is recommended for most people. If you are experiencing any problems with the EFS verison, try the FAT version. This game requires a DLDI patch compatible card to play.

London, 1974. You are a famous Scotland Yard Detective who must solve the murder of the rich aristocrat Angus McFungus, who’s body has been discovered at his home at 427 Park Lane. Arriving at the residence you soon discover that this will not be a simple open and shut case, and will take all your finely honed detective skills to solve. Can you put your finger on the killer?

You must collect 10 pieces of evidence (most are marked with a small E) and then guess the murderer. The evidence must be placed in the Padded Envelopes (which you will find in your room). You have 2 hours and 20 minutes to solve the case. 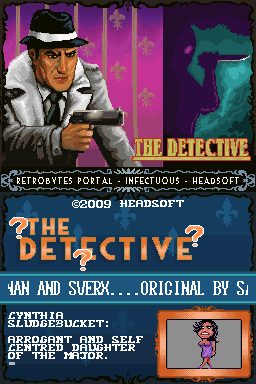 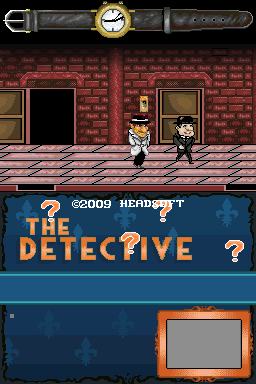 The game has been tested with the following emulations:

No autosave feature when using emulators, howver you can create save states which does the same.