This is a SDL2 imprementation of the PC game Plumbers Don't Wear Ties, written from scratch by MaikelChan on PC and ported to the 3DS.

The game is infamous for being considered one of the worst games ever made. The 3DO version is much more known (relatively speaking), but there was also a very rare Windows version released in 1993. Due to being 16bit, it cannot be run on modern PCs.

The original program has not been decompiled or reverse-engineered, and it still needs the assets from the original PC version to run. The only thing that has been reverse-engineered is the GAME.BIN file, done by Daniel Marschall, which contains information about the scenes, background images, sounds and sequences of events.

Note: The game contains mature contents and is not appropriate for all ages. Viewer discretion advised.

Note: Requires the game assests from the original PC game to run.

Copy PlumbersDontWearTies-SDL.3dsx into the 3ds folder on your SD card.

Create a new folder named PlumbersDontWearTies in the 3ds folder on your SD card.

Copy all files from the original PC version into the PlumbersDontWearTies folder that was created earlier.

Copy Font.ttf to the PlumbersDontWearTies folder. You can also pick other TTF font file and rename it Font.ttf. It will be used to render the score in-game.

Make sure you have your dspfirm.cdc in the 3ds folder, as you will need it to have sound in homebrew games. If you don't have it, dump your DSP.

Plumbers Don't Wear Ties is an adult-oriented romantic comedy visual novel/dating sim. The game stars Edward J. Foster and Jeanne Basone as John and Jane, respectively; two people who are being pressured by their respective parents to go out and find a spouse. The player's task is make the right choice and bring John and Jane together.

The only interaction is where the player gets to choose the storyline (two to three choices at a time) in a DVD menu-style manner, although there are only one to two right choices. At certain points in the game, the player has the opportunity to choose what actions John or Jane will do.

A - Skip to the next picture / Confirm choice 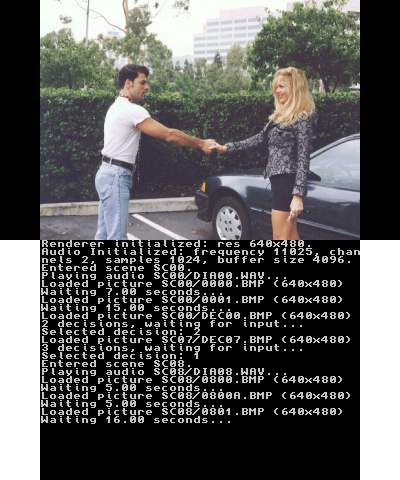 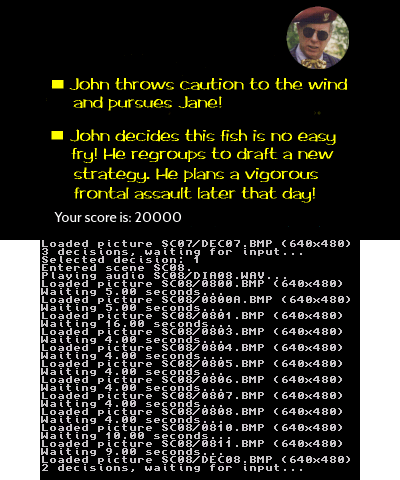 Can crash randomly (might due to some bug in SDL or the 3D library).