GBAldr is a 3in1 loading tool. It supports the newer EZ 3in1 Plus kits.

This is not official software for the DS, as such it did not pass any rigorous testing beyond few who have received alphas who were able to put it through. Please use it at your own risk, there is no warranty expressed or implied despite putting the best effort to make sure it works right.

If you are a minimalist, the application can work entirely independent of any external skin files, only need the .nds.

To keep the binary small and fast to boot, the only skin files included are a dialog box, font and icons.

On the first boot of the application (or any time the save battery goes dead or is disconnected, or any time the last page of SRAM is erased) it will prompt with a message.

Press the button, and it will backup all data in the 512k SRAM save space to the file specified, then erase SRAM for use with this program.

GBALdr provides no way to restore _all_ of that data to SRAM, it only restores/saves 256k (64k*4) (in retail units the first 64k is not backed up with normal use).

Patching must be done by an external program. EZ4 client is the best at the time of release and the latest can be found here.

255 files in the current directory listing (dirs/sav/gba and ./.. if you have them set to show).

Single ROM at a time.

The method of determining exactly how much save space each rom takes has not been nailed down 100%.

All save files produced by this app will be 256k (except on prototype units) until such a thing happens.

B - Cancel, Go up a directory

Start - Ask to launch the current game on 3in1 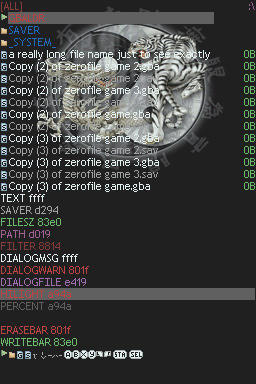 Timestamps on new files are not accurate.

Does not create directories when they dont exist.

Do not place the gbaldr dir into hidden directories - use :/gbaldr/ as an alternate (for any card).

May corrupt your card if dumping 32MiB is more than the free space on your card.

If you have an EZ5 and a prototype 3in1 - do not use it's built in GBA booter with ROMs written by this app unless the save you imported only works at 64k import, always use the DS main menu.