SpelunkyDS is a homebrew port of Derek Yu’s Spelunky Classic for the Nintendo DS. Only the cave level is implemented out of 4 different levels in the original game and it is no longer in development.

The aim of the game is to explore tunnels, gathering as much treasure as possible while avoiding traps and enemies.

You can whip or jump on enemies to defeat them, pick up items that can be thrown to either attack enemies or set off traps, and use a limited supply of bombs and ropes to navigate the caves.

If you lose all the hearts or runs into an instant-kill trap, you will have to start from the beginning.

Note: If audio does not work, launch the application using TWiLight Menu++.

Left/Right - Move to the left/right

Down - Look down, Crouch, Climb 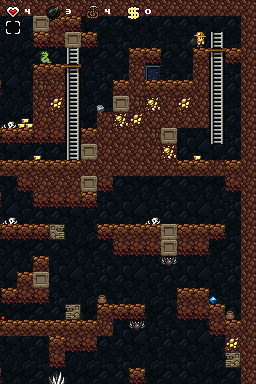 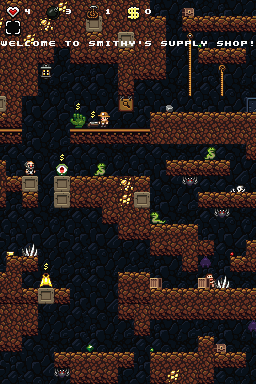 Tested by the author with DeSmuME emulator and R4 card on a real Nintendo DS Hardware.

Also tested on melonDS and no$gba.

Only 1 level is implemented and some minor bugs, but in any other aspect, the game is completely working and playable.

Tools that are used: