PSP-Mancala is a homebrew Mancala board game. Originated in East Africa, Mancala is a generic name for a two-player turn based stratey board game played with small stones or seeds (the word Mancala came from Arabic word Naqalah which literally means To Move).

This homebrew is the Awari variant from the board game familly of Mancala. While the rule of this game is simple, the complexity can be compared to Chess Game.

Unzip the ZIP file, and copy the folder pspmancala to ms0:/PSP/GAME/.

The player to move chooses one of its own, non-empty pits and removes all stones from the pit. The player then sows the stones, counterclockwise, over the remaining pits, skipping the original pit if there are more than 11 stones to sow.

The player who captures most stones, wins the game. The game ends when a player cannot move, however, to avoid such a situation early in the game, it is not allowed to do a move that leaves the opponent without countermove, unless all moves eradicate the opponent.

Mancala is played on a board where each player owns 6 pits. In the initial position, all pits are filled with four stones, thus the initial position has 48 stones. Take it in turns to sow the stones around the board, including your own store but skipping your opponent's. If the last seed that you sow goes into the store you get another turn.

The store is placed on the right of each player, but it is not visible in PSPMancala. The content of the store is displayed in the score status line.If the last seed you sow ends in an empty pot on your side of the board you capture that seed and all the stones in your opponents pot opposite. Put all these stones in your store.

D-Pad - Move on the board 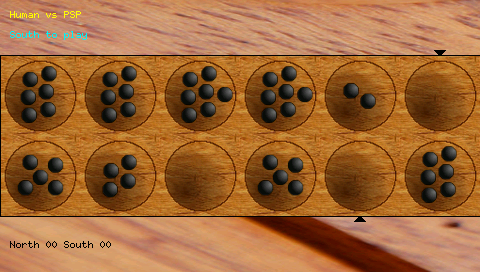 Tested by the developer with Firmware 5.0-M33 and should work with any 3.x/4.x/5.x compatible firmwares.