MultiTasKing is an application of which you can manage multiple processes simultaneously with an interface that is reminiscent of the Windows Operating System. The application is available in both Spanish and English. It is programmed in C using OSlib MOD 1.0.1 and the source code is made available along with the latest release.

This was one of the contest entries for the Scenery Beta 2010 (PSP Applications, 2nd place).

If you do not use HEN and the system language of the PSP is not Spanish, the program will start in English.

If you do use HEN, in order to use it in English you must delete the EBOOT from the path ms0:/PSP/GAME/MultiTasKingv301/EBOOT and rename the EBOOT_En to EBOOT (the one on the same path).

Analog - Move the cursor or mouse

R+Cross - Drag window from anywhere (not just from the bar) 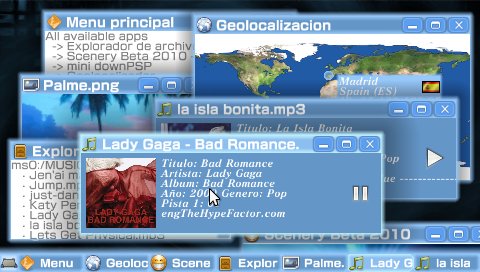 The program sometimes hangs when scrolling through the menus or text boxes.

DownPSP - mini application is in its early stage and installation fails sometimes after you have downloaded the homebrew.