MathsAttack is a DS homebrew maths game based on MathOp.

The principle is to eliminate operations that accumulate on the upper screen before they reach the top of the tower.

Goal of the game is to make the most points.

For every 1000 pts, the speed increases. The score is calculated on the basis:

For a combo you add the points for different operations, and multiply by the number of deleted operations. Example:

Will result in a combo of 4 operations comprising 2 multiplication (10), one subtraction (6) and one addition (3). 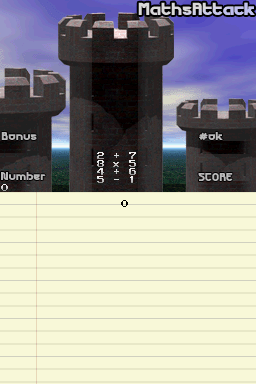 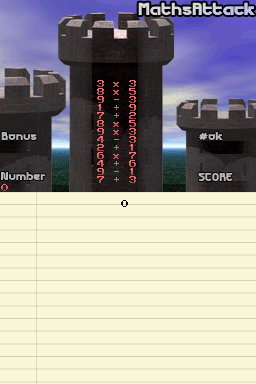 A big meci to Japi for the quality graphs for the tower and the keyboard as well as tons of ideas.

Thanks also to tembargo for these wacky ideas on irc.