MasterBoy is an all-in-one Game Boy emulator for PSP. It emulates the Game Boy Color, Master System and Game Gear. The SMS/GG emulation is based on MMSPlus, which has been improved since then.

It allows you to fully recolor your games, not only by selecting one palette for the whole screen, but by recoloring each object on the screen. And you don't need to be a programmer, there's no romhacking (you keep using the original ROM) and it works for nearly all existing games.

This is an entry from the Neo Summer Coding Compo 2007 (PSP Applications, 1st place).

Note: MasterBoy was developed by Brunni and the last official release is version 2.02 (MasterBoy version 2.10 was a rebadged copy and was being re-published as another update version, as for EmuMaster).

Copy the MasterBoy folder in the /PSP/GAME/ directory of your PSP like every other PSP app.

Then put your ROMs somewhere on your Memory Stick. You should regroup them in one folder, so that it's easier to find and play them.

In the MasterBoy folder, by default there are two directories: Roms SMS and Roms GBC, you can use these folders by default to place your games.

Start MasterBoy. It will display a menu where Load ROM is the first selected option.

When selecting Load ROM from the File menu, you will be brought to a list of the folders located in your ms0:/PSP/GAME/ directory.

You can go to the parent folder by pressing the triangle button, or select a folder with up/down and cross.

When ROMs (GG, SMS, BIN, GB, GBC, SGB, CGB, ZIP) are available, they're displayed just after the folders. Press Cross to select one, the game will be loaded and started automatically.

There are some (unfinished) color packs supplied.

Find the Colorpak directory and see what's inside. You can play those games with color in some scenes.

These files can be used for you if you want to create additional color packs for games.

It features a battery indicator, skinnable interface with nice effects and quite a lot of options.

You can also listen to your favorite VGM and GYM files with the included music player (in ZIP to be used as a playlist, see sample file music.zip).

R - Switch to next track 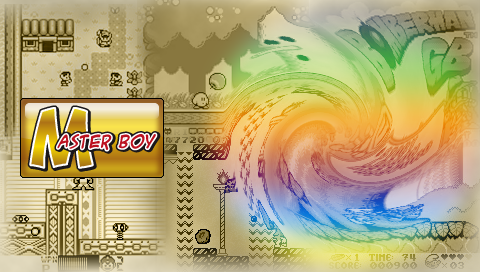 The bug that some people has, save states not working after saving/loading a few, is still not fixed. In between, if you have this problem, use the RAM state and save manually before exiting (or save less often).