Marshmallow Duel DS is a standalone 2-player game built for the Nintendo DS console, based on the original Marshmallow Duel. The entire game engine was created from scratch, using the PALib DS development library.

It offers simple gameplay mechanics in a style similar to Super Smash Bros and is fully configurable through a plethora of options. The game engine is designed to manage low-level sprite routines efficiently and easily, leaving the higher-level game logic abstracted into its own tier of classes. The source code is released publicly under the GPL which is also available from the official website.

It is a 2 player deathmatch game of luck and skill where each player tries to knock their opponent into the deadly marshmallow pit or destroy them with one of the 18 weapons that randomly spawn in the map.

The game itself can be viewed via the top screen, while the bottom part of the DS displays the scores. 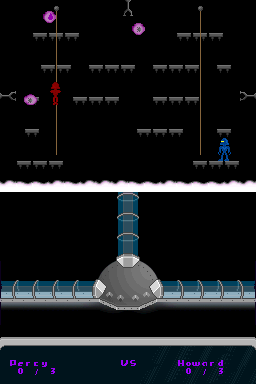 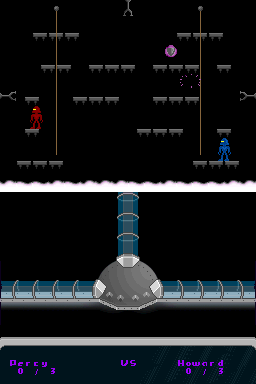 Boomerang can be thrown twice on rare occaisons.

Just a heads up, the game may crash for you, especially in an emulator. It hasn't crashed in the week I've been playing it before releasing, but who knows.

All code and some artwork by pospi.

Most game sprites are taken from the original Marshmallow Duel and used with permission.

Based on the Marshmallow Duel universe © 1996 Duncan and Roger Gill.