Manic Miner in the Lost Levels

Manic Miner: The Lost Levels is a DS port of classic platformer Matthew Smith's Manic Miner series. It features a total of 50 stages, arranged in three sections. The Lost Levels portion includes 20 levels that were added (or modified) for the Manic Miner versions released on Oric, BBC Micro, Dragon 32, Amstrad CPC and GBA.

Copy the .nds file to the root of your memory card.

It's recommended to launch the game directly from the card's normal menu, rather than through secondary interfaces like Moonshell.

The tale of Miner Willy and his incredible adventures in the mines, and then the mansions, of Surbiton is legend. But like all legends, it doesn't tell the whole story.

Most people know Willy simply as a digger who got lucky and lived happily ever after in decadent luxury. Far fewer know the secret - suppressed for quarter of a century by the government - of how he also saved Planet Earth from alien invasion.

It wasn't until an eccentric but dedicated historian writing a paper for a renowned academic journal (Retro Gamer issue 63) pieced together the complete saga of Willy's heroic exploits from fragments of scattered evidence - in the form of obscure retellings of the 'Manic Miner' folk fable in ancient languages readable only via long-obsolete machines - that the whole truth was finally revealed.

Collect all the flashing objects to open the door and escape each stage. Beware enemies, conveyor belts, sharp objects, crumbling floors and long falls. Flip switches to alter various aspects of the stage.

The Lost Levels are 20 stages taken from genuine Manic Miner ports. They're levels which didn't appear in the original ZX Spectrum version of the game, but were added to subsequent official ports for such platforms as the Oric, BBC Micro, Dragon 32, Amstrad CPC and Game Boy Advance, sometimes as additions to existing levels and sometimes as replacements.

20 of these stages* were first compiled and ordered into a notional sequel by Stuart Campbell (in 2004, on his website World Of Stuart), which eventually became the subject of a feature in Retro Gamer magazine in 2009 before being turned into the reality you're now reading about.

The Retro Gamer feature included a Game Boy Advance level (Mummy Daddy) in place of an Oric one (The End Of The World) in order to enhance the feature's visual appeal in the magazine, but the Oric level has been restored in MM:TLL to retain the original vision of the game (Mummy Daddy still appears in MM:TLL in the form of a bonus stage - see below).

(*There are in fact in total 68 completely original levels in official Manic Miner ports, over and above the 20 of the Spectrum version.)

Unlocked on completion of The Lost Levels, Willywood is a standalone 10-level game featuring original stages designed by the authors of this game.

The 20 bonus stages are a mixture of original levels and classic levels from both Manic Miner and other related games. They're played for speed rather than points (each keeps a record of your fastest time), and are unlocked one at a time, by finding secret areas in stages of The Lost Levels and Willywood.

If a level has a secret area to find, a small seal will appear at the top right corner of the descriptive scroll which occupies the DS' second screen. On finding the area (you'll know when you've done it) a new bonus level will be unlocked. You don't have to complete the level after finding the secret area, just getting there is enough. Notes

The save system works by saving game data either when a new level is found or when a level is unlocked, and also on the game returning to the title screen, so do not turn your DS off during these times. 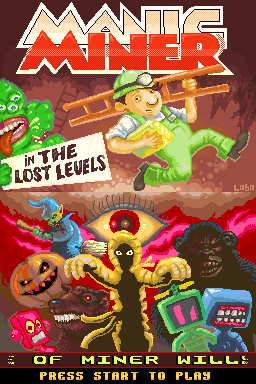 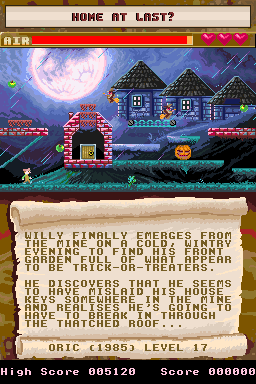 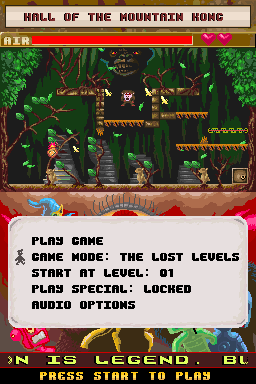 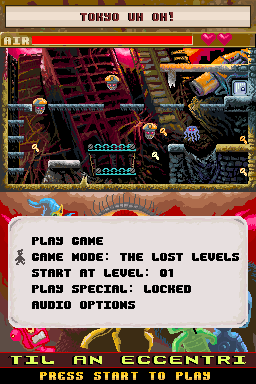 Note: The emulators will not automatically save your progress, due to unavoidable technical issues with DS emulation. However all three offer Save States which will do the same job, just create a save state from the File menu whenever you're about to quit your play session.