JaysOS is a "toy OS" that runs on the Gameboy Advance. It provides preemptive threads, semaphores, condition variables, and message queues.

It includes 3 small demo apps: a breakout game, a version of Conway's Life, and a cpu usage displaying app.

As of 0.2, it also includes a port of the Waba VM for Java bytecodes. Waba comes with a few interesting demo applets you can try out.

JaysOS apps interact with the world using the "UI Manager", which is in charge of:

There is also a "shell" app, which works over a serial connection (e.g. MBV2 cable), and allows you to control what is going on using simple commands.

As the ARM7TDMI has no MMU, JaysOS can't provide seperate address spaces for "tasks" like in a real OS.

Another limitation of JaysOS is the lack of proper system calls. In most OSes, user apps communicate with the kernel through software interrupts. Unfortunately in the GBA the BIOS traps all software interrupts and handles them itself, so they can't be used to call into JaysOS. Apps have to call kernel functions directly.

As of version 0.2.0, there is a heap manager, but it is only used by the apps. The kernel itself uses only statically allocated data structures.

Static memory allocation means a lot of things are fixed in JaysOS. There is a maximum of 32 threads for instance.

This was only tested with the MBV2 cable, but it should works similarly with homebrew serial cables too (no emulators simulate the serial port, so you will need a real GBA for this).

Set up your terminal software to 9600 8N1 ANSI mode (tested with minicom on linux and zterm on MacOS X - using a keyspan USB->serial adapter).

Turn on the GBA. If you are using the MBV2, type "C" (on your PC) a few times while the Gameboy logo is displaying until it prints "Coded by Jeff Frohwein".

Now type "U" until you see a message welcoming you to JaysOS. If it doesn't work try "rebooting" your GBA and trying again.

You can type "help" to get a list of recognised commands. Currently this is: 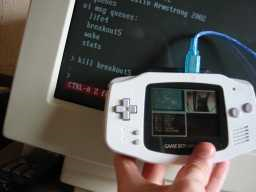 Forgotten for the VisualBoyAdvance emulator.

Adrian O'Grady for the "zx" font. His uart code was very useful too.

All the people who figured out how the GBA works and then wrote it down.

Rick Wild for writing Waba, and everyone who hacked on it since.