A port of Defendguin by Bill Kendrick which is based loosely on Defender.

This is a quick SDL port using GPF's SDL lib. No sound yet but controls are working.

A certain monopoly-owning bad guy has been cloned hundreds of times by an unknown alien race. They are now attacking earth, kidnapping little penguinoids and converting them into mutants. Helping them on their way are some other nasty alien ships, of which there are plenty...

Every time you surpass 10,000 points, one additional ship and one additional smartbomb are awarded, along with a special sound effect. There are 20 levels in the game. The last level is special, with an evil boss you must destroy to complete the game.

Up - Move ship up

Down - Move ship down 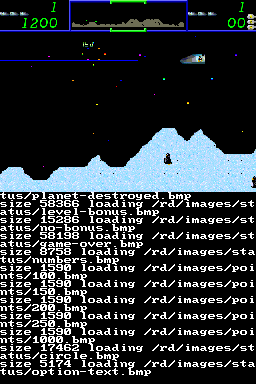