DanTE Advance is a text editor for the Game Boy Advance. DA is one of the few text editors available on the Game Boy Advance, due to the hardware constraints of the GBA input capabilities: 10 buttons (including control pad directions) for 26 higher and lower-case letters, 10 cyphers, punctuation and other symbols. In addition the software has to deal with conventional user-interface inputs (moving cursor, skipping pages, popping menus, etc).

DA is an attempt to face this apparently unsolvable problem, it is designed in such a way to speed up the typing as much as it is possible on an input device which is no more than a joypad (like the one of the GBA). This is accomplished through an intelligent mapping beetween the keys of a standard keyboard and the few buttons of the GBA. No additional hardware, no memory stress, no big process power needed.

DA uses GBA SRAM to store its data and this choice has some important implications:

Exchanging data beetween DA and a PC is as easy and fast as loading an SRAM bank on your cart. This operation is supported by most GBA cart flash software and takes just a few seconds to be accomplished. You can handle this SRAM banks as text files and edit them with any PC text editor.

Save and load operations are fast, since writing to and reading from SRAM is fast. The only drawback: SRAM is 32KB and this is the maximum number of characters available for your documents alltogether. 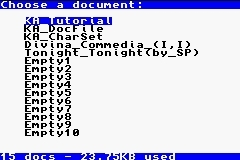 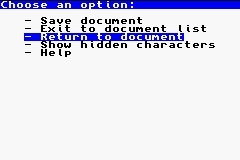 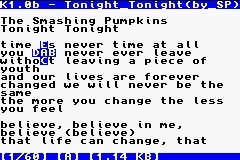 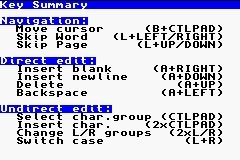 DA is developed for use real GBA. It also requires good lighting for your eyes to keep safe. A GBA SP is the best choice.