Awale is port of the most ancient board games that are still being played, also called Oware.

The objective of the game is to capture more seeds than your opponent. At the end of the game, the player who has captured the most seeds wins.

The board is divided into two areas, hollowed with 6 holes each.

At the begining, 48 seeds are distributed among the 12 holes (4 seeds in each hole).

Every player plays alternately, the first one to play is chosen at random.

The player takes all the seeds in a hole of his area and distributes them counterclockwise, one in each hole.

If the last seed to be distributed falls into one of the opponent's holes, containing already one or two seeds, the player captures the two or three seeds.

The captured seeds are taken off the board (the hole is left empty) and collected into the player's loft.

If the number of seeds taken in the starting hole is greater than 11, it constitutes a loop.

The starting hole is left out every time in the distribution loop, and therefore always left empty. A hole containing enough seeds to loop is called a Kroo.

A player isn't allowed to starve the opponent.

Meaning a player can't play a hole that leads to capturing all the seeds in the opponent's area.

End of the game

The game ends if it meets one of the following conditions: 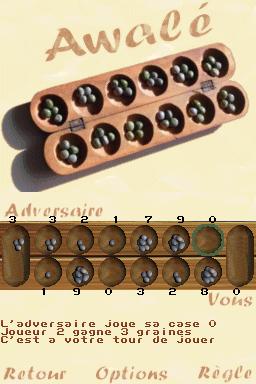 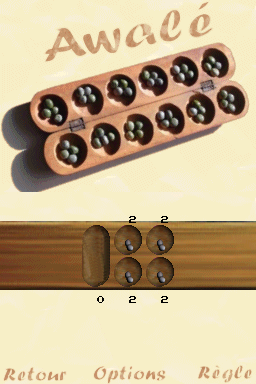