AVEC is a GPS vector mapper for the Sony PSP.

This program reads and displays MP (polish format) map files which are very common among the Garmin custom mapping scene, and can make use of a GPS device connected to the PSP serial port to display your current location on the map. A seperate version of this program makes use of the PSP-290 USB GPS device.

A built in converter (or seperate Windows converter program) can be used to convert to a custom indexed file format that greatly improves drawing speed at higher zoom levels.

The Program also has a Find Place by Name feature, and a Track Up Display Mode that work similarly to the respecive modes of a commercial GPS unit. One objective for this program are to discover, and expand on functionality that is not available in commercial GPS units.

This is an entry from the Neo Summer Coding Compo 2009 (PSP Applications, 1st place).

This version of the AVEC program uses serial port to connect to GPS devices.

To install, copy the program folder to the homebrew game folder of your PSP.

The program will also work with original 1.50 Firmware as long as the program folder is kxploited.

This version of the AVEC program uses USB port to connect to the PSP-290 GPS.

To install, copy the program folder to the homebrew game folder of your PSP.

This should be the /PSP/GAME/ folder, or /PSP/GAME3xx/ folder (xx representing the last digits of your Firmware version).

You will need to obtain Garmin compatible maps for this program, for more information (setup, tutorials and troubleshoot etc) please refer to the enclosed readme.

The first time the program is started, you will see an intro screen which shows the functions of most buttons. This screen is disabled for future sessions because it is only displayed when a config file does not exist, and a default config file is created by the program on it's first session.

Maps should not be too large, since the program drawing will slow down as map files get larger. One large city at a time should work at a good speed, or a topograph of a mountain, but it's best to experiment. Testing was done with individual detail map tiles from the Garmin Mapsource Metroguide Australia CD.

When a map is loaded, the starting position is at the upper right most point of interest or line. The map is initialy displayed at the highest preview zoom level where the entire map fits in the screen area, and wire polygons are displayed.

Zooming in any closer than the initial zoom level will remove the wire polygons, and zooming in a little further will reveal full map detail. Points of interest are only shown at high zoom levels.

If you use a map with any land contour lines, it is assumed by the program to be a topographic map, and the background will be coloured a shade of green, otherwise the background is black.

From the main menu is where GPS mode can be toggled, and other configuration options can be set and saved. GPS mode must always be switched on manually. This option is not saved.

A new map file can also be selected from the file browser on the left side of the menu screen.

A GPS information bar will appear at the bottom of the screen which displays the last time, speed, and location aquired from the GPS device.

The user mode version of the program also displays a GPS signal strength meter while GPS mode is active.

Find a place on map

The Find a place on the map option allows you to enter a place name and have the program locate the position of that place on the map. The place can be a point of intrest or any line type such as a street or creek for example.

You do not have to enter the entire name. Just enter enough letters to narrow down the search.

If the place is a street, or other type of line, it will be coloured pink when it is displayed on the map to help you locate it until you search for another place.

While in viewer mode you can use the analogue joystick to point at a street, and it's name will be displayed.

In GPS mode, the current street name at your location will be displayed if it is touching the crosshair.

The names of all streets in view are displayed at the highest zoom level.

The functionality of the program dealing with street names only works if names are available in the map file.

Many open source maps do not contain much street lablel information. Original Garmin Mapsource products are best for this.

The 3D terrain viewing mode allows you to view and rotate topographic maps in 3D. The map grid, and all points of interest are disabled in 3D terrain mode, as well as all lines other than land contours.

Track up mode allows the user to rotate the map, just as it does in top down view mode.

There are two levels of terrain exaggeration that can be selected in the configutation menu screen. 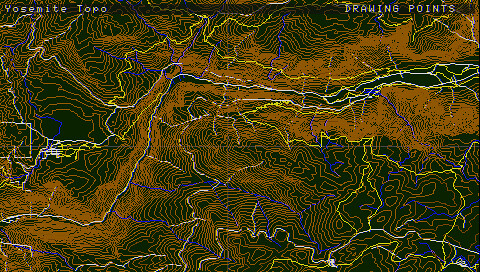 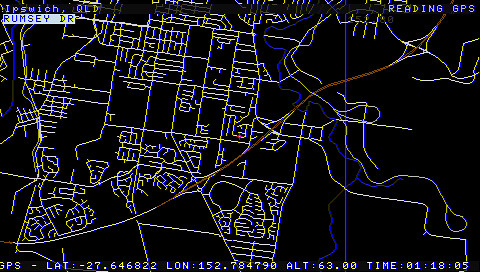 Circle - Locate it on the map

The AVEC program is known to work with other firmwares as well.