ARDS Firmware Tool is an all-in-one tool meant for regular users and developers alike to edit, extract and create NTRBoot compatible firmware files for the Action Replay DS/EZ/Media Edition/DSi. You don't need to patch Code Manager to flash firmware files generated with this tool, as it automatically calculates the correct checksum for them. Not only that, but generated files also tend to be very small as everything that's not needed is trimmed away (the file size of a firmware containing Boot9Strap v1.3 is only 62kb, less than a third of the size of the previous implementation).

The tool also brings lots of other improvements to the table, such as the ability to super easy NTRBoot firmware generation for those of you following the guide, a function to inject your own NTRBoot compatible FIRMs (such as Godmode9), NTRBoot support for both retail and devkit consoles (the previous implementation for ARDS only worked on retail units) and an easier way to install NTRBoot on an ARDS Media Edition without a flashcart, aswell as a method to fully restore it afterwards. There are also a lot of other functions intended for devs and power users, as well as detailed guides in the readme.

How to flash a firmware to an ARDS

Note: You will need another Action Replay of your same model/a flashcart if you want to restore your ARDS/EZ/Media Edition to its previous condition after installing a NTRBoot compatible firmware.

How to restore an ARDS

Q. Sometimes I get "Protocol error" when flashing FIRMs to my ARDS! What's up with that?

That is a known bug with Code Manager.

As long as your ARDS says "Reboot your NDS now!" on it, it means that your firmware has been flashed correctly.

Through Code Manager we can only write to the first megabyte of an ARDS.

Considering the few KBs used by the firmware's header, that's how much space is left to write a firmware. Still, that's plenty of space for a NTRBoot compatible firmware.

Q. Why can't you just link to an ARDS ME firmware generated by this tool instead of making me do a ROM dump and making my own.

Legally speaking, that would be copyright infringment by distributing copyrighted code written by Datel without their consent.

Q. Instead, do NTRBoot compatible firmwares generated by this tool contain any copyrighted content?

No. Every single bit of code made by Datel has been completely removed, so they're freely and legally redistributable.

Q. When extracting a firmware I get an error saying that the ROM is smaller than 1294336 bytes. What does that mean?

Your ROM is probably an improper dump created by stripping the header from a firmware file.

Try to use the rebuild header function in the header tools tab.

Q. Why changing a firmware's header to get recognized as an ARDS ME firmware will cause an Action Replay to partially brick?

When Code Manager flashes an Action Replay DS Media Edition firmware, it will actually overwrite just a small portion of the internal NAND (the one containing the Action Replay code) and nothing else.

That's not enough to install NTRBoot and will make you unable to use the Action Replay function.

You can recover your ARDS ME by following the "How to restore an ARDS" guide I've posted before, but only if you made a ROM backup before.

Q. Why can't I use an official Action Replay DS Media Edition firmware to restore my own one?

See the question above.

Q. Why my antivirus detects this as a virus?

You can clearly see the source code of this tool and verify that's not doing anything malicious on your computer.

Howerer, some antiviruses simply don't like AutoIt and immediately flag anything made with it as a virus.

If your antivirus does that, either add ARDS Firmware Tool to the whitelist or change it altogether, as it's probably not a good one.

Q. Windows only? What about Linux/mac OS?

Code Manager only works on Windows, so it would be pretty pointless to make a version of this tool that runs on anything else than Windows.

Q. So, if I can flash ANY file to an Action Replay... does it mean that I can flash ROMs to it?

Quick answer - not really. More detailed answer - 1 MB is too small for any commercial ROM and you'll have to rearrange some stuff in order to match the internal structure of the ARDS' NAND.

In other words, homebrew ROMs are more likely to work. 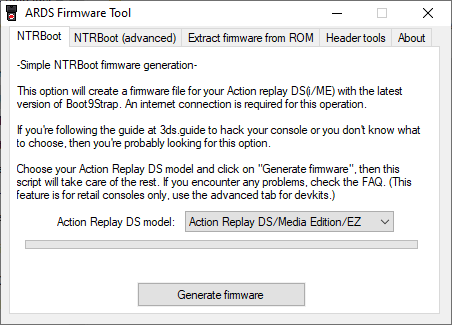 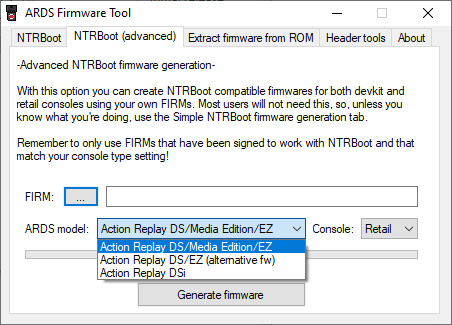 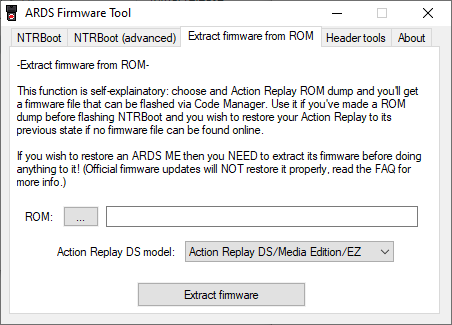 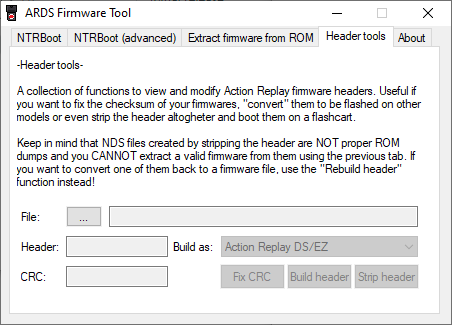