Wubly PSP is a port of the Wubly game by Chococino. Initially developed by Jesse Venbrux in 2004 for PC, Wubly is a fast paced action game which is similar to Canabalt with Dance Dance Revolution mixed in.

This game takes place on the planet of the Ubly's, where you will control a Ubly named Wubly throughout the entire game.

The objective is to recover all the Ubly rings to save the planet of Ubly's and defeat Xubly, an evil Ubly.

L - Return to the previous menu

Cross - Touch the red ring (at the end of the level) 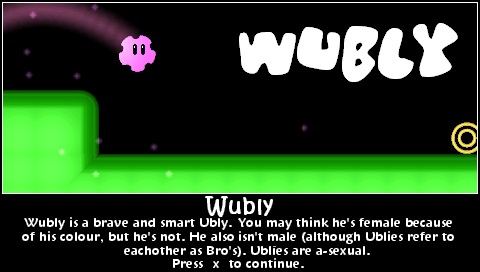 The Options at the menu screen does not work.