Multi Tasker is a handy application capable of interacting with all sorts of media in a vast amount of file formats on your PSP, including: 3D Models, Images, Music and Text.

It was one of the contest entries for the Neo Spring Coding Compo 2008 (PSP Applications).

Load any of the supported formats into the scene to view.

Check the Relative checkbox in the Toolbox window to add the values in the edit boxes to the current scale/rotation/position. If left unchecked, it will set the values to equal the ones specified.

Change the Model's current material flag with the Options menu option. Materials include:

Use the drop down box to change the filtering applied to the current loaded model. Filters supported:

Simply open a supported file and view. Click and drag anywhere on the image to drag it around screen.

Load any supported audio file and listen. Play, Pause and Stop the music from the Music Menu Option.

Everything will default to opening as a text file, however this is only intended for text files (automatically word-wrapped).

All of the above can be done along aside one another, meaning you can be listening to music, viewing a model, viewing a photo whilst reading a text file.

The PSP isn't a processing power house however and may affect the processing speed, it is suggested to toggle the scene off when not needed as a quick fix. 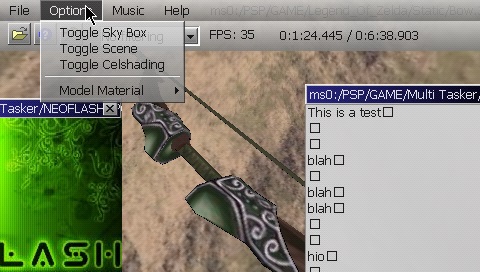 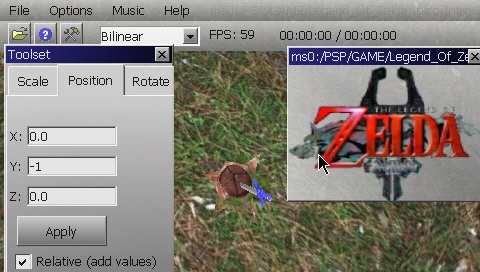 This was a port of the very basic example #9 that comes with Irrlicht.