PSP-FTPD is a simple FTP server for the PSP coded by Ludovic Jacomme (aka Zx-81). It permits to send and retrieve files or complete directories to and from your PSP without any cables, using your Wireless connection (WiFi), with a FTP client on your PC such as Filezilla.

It has been tested using gFtp on Linux, Filezilla and IExplorer on Windows.

Unzip the ZIP file, and copy the directory psp-ftpd on the /PSP/GAME/ directory (as any others homebrew).

If you want to use non-anonymous FTP transfert, you can edit the file psp-ftpd.cfg (with notepad for example) and specify a line without any blank characters:

If you don't want to let the all content of your Memory Stick visible to FTP clients, you can specify a root directory for the FTP server.

Edit the psp-ftpd.cfg file (using notedpad for example) and specify a line without any blank characters:

That way, PSP-FTPD will let see only the content of the /PSP/MUSIC/ directory (and its subdirectories) to FTP clients.

If you want to use the multiple user/homedir feature, then you can specify several couple lines with "auth" and "root" commands, as follows:

On this example, using a FTP client with "umd" as login and "zx" as password you will be able to see the content of a UMD insterted in your PSP.

While using "ms" as login, and "zx" as password you will be able to browse your Memory Stick.

Run PSP-FTPD on your PSP, and choose your wifi access point and validate. After few seconds, you should see the message:

If you use anonymous connection (without any password in the psp-ftpd.cfg file) then you can access your PSP using Internet Explorer with the previous URL (ftp://192.168.0.10).

If you use authentication, you have to specify user and password in the URL (for example, ftp://zx:[email protected]).

When you have finished to transfer/rename/remove files on your PSP, close the connection and it will go back to the eloader.

For FW 1.5, PSP-FTPD may sometimes fail to connect to your wifi access point. To overcome this problem you can use a static IP (instead of DHCP) in the network configuration of your PSP. 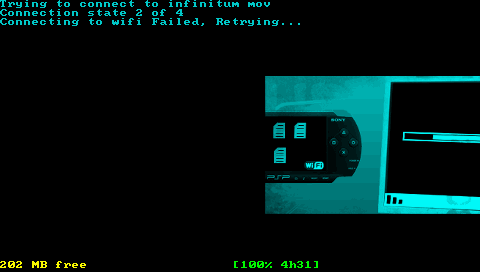 Author of this new version: Ludovic.Jacomme.