El Juego Más Difícil del Mundo PRO NDS (Spanish) is an adaptation of The Most Difficult Game in the World PRO for the Nintendo DS, which was a project started in 2011.

Initally play as a red square (you can change into other color) and your goal is to get to the end of the level. Collect coins and keys along the way, which you will need to open doors in order to move forward.

Avoid crashing into the enraged blue circles, they will try to finish you off and blast your paths until the end of the journey (and take away all the coins and keys).

R/L - Change the color of the square

Select - Back to menu 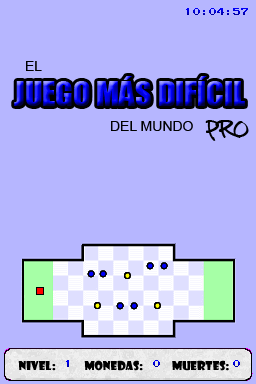 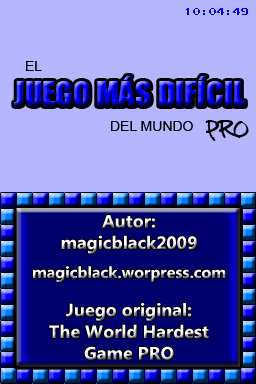 The Hardest Game In The World PRO NDS - Level 6 (magicblack2009)